Back Home Gemstone Information A Gemstone's Journey | Gemstones from A-Z at Rocks & Co.

"The sheen and colouration of precious stones are the same today as they were thousands of years ago and will be for thousands of years to come. In a world of change, this permanence has a charm of its own that was early appreciated." 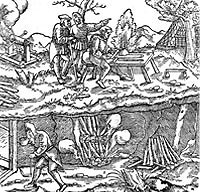 Underground fires using thermal shock to split rocks from the 'De Re Metallica' (1556) by Georgius Agricola (1494 - 1555). A mining method common in 16th-century Germany, fire setting is still used in Madagascar

To early humans, the mystifying beauty, rarity and durability of gemstones were unexplainable. In a world where people aged, flowers wilted and sunsets disappeared, gemstones alone remained unchanged. For them, the only logical explanation was that they were divine, forever linking gemstones to the spiritual. From Buddhism to Judaism, and Christianity to Islam, this legacy is found within all major religions. To our ancestors, gemstones weren't simply baubles, they meant so much more. They were amulets and talismans that people literally believed could influence their life.

Gem lore gives us incredible insight into how our ancestors viewed gemstones and the importance they placed upon them. Today, many people continue to have ideas about the 'healing' power of gems. Created by forces of nature between three billion and several tens of millions of years ago, gemstones have had one heck of a ride. Their journey takes them right back to the genesis of our planet. At 4.4 billion years old, a tiny mineral fragment of Zircon discovered in Western Australia is the oldest known object on earth. This is pretty impressive, considering the earth was formed less than 150 million years before! Gemstones formed beneath the earth's surface in a variety of different environments, in three different rock types:

Like most people in the gem business, I believe that mining should never be at the expense of communities, workers or the environment. All mining should be sustainable; protect water sources from chemicals, debris, rubbish, silt and biological pollutants; minimise the destruction of flora and fauna; and restore mined land as close as possible to its original condition. Having routinely spent time in mining communities in Asia and Africa, I can testify to the standard of living improvements sustainable gem mining affords.

A gemstone deposit is the area where gemstones occur. A deposit is called a 'mine' after it has been worked and one gem deposit can have many mines. Alluvial mining is the most common form of gemstone mining. This method extracts gems from sedimentary deposits, also known as placer or secondary deposits because the gems are not found in the rock in which they formed. These deposits are caused by the erosion of host rocks and include the prospecting of riverbeds, sedimentary deposits beneath the earth's surface and marine mining. The mined earth is either washed with water or sieved, using gravity to extract the rough gemstones.

Rough from alluvial deposits is usually rounded, scratched and cracked due to weathering. This is actually beneficial, as the culling of poorer specimens has already occurred. This typically results in a higher percentage of gem quality crystals in alluvial deposits than primary host rock deposits, where gems are chipped from the rock in which they formed or are hosted. 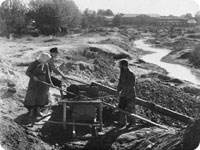 Alluvial gold miners in Russia's Ural Mountains in the early 20th century. It was from deposits like these that Demantoid, a green variety of Garnet, was discovered in 1855

While they spend a long time waiting in the ground, once discovered, most gems are mined and transformed into jewellery within a relatively short time. It typically takes about one to three years from mining for a gem to be set in jewellery and sold, but this can be just a few months or longer than 10 years. The supply chain in the coloured gemstone industry is long and it is not uncommon for a gemstone to pass through seven pairs of hands from the mine to being set in jewellery and then sold to the consumer.

In his book, 'Gemstones: Quality and Value, Volume 1', Yasukazu Suwa states that current annual gem mining production is about one-thirtieth of total past production. Considering that mined gemstones can potentially re-enter the market every 30 years (or so), he estimates that a volume close to that of newly mined gems re-enters the market every year. Saying this, new gemstone deposits are still being discovered (Mozambique ParaÍba Tourmaline) and old deposits can start producing again (Russian Alexandrite). Keeping up to date with new discoveries and current availability will help you be a clever gem buyer. Two useful diagrams are included in this section, one that shows the relationship between gems and people, and another that shows the countries in which some popular gemstones are currently mined.

The Origin of Gemstones 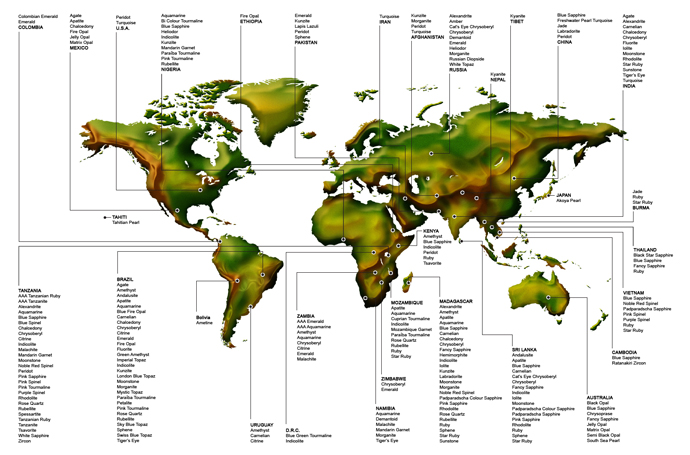 The origin of gemstones